The National Fire Protection Association (NFPA) reports that approximately 11,100 commercial kitchen fires occur each year.  The NFPA also reports that cooking equipment is the primary cause of home fire injuries. Additionally, there were approximately 162,400 cooking-related fires between 2009 and 2013 in the home. These startling statistics emphasize the stark reality of kitchen fires. They also highlight the need for more people to be aware of how to respond to kitchen fires.

If these statistics don’t alarm you, a real-life story just might. In 2015, Western Mass news reported that Kathy Chapdelaine, an Easthampton Massachusetts resident, had completely lost her home due to a kitchen fire.  That home held precious memories for her since it had been built by her late husband. Another story of devastation is a bit more recent. In May 2016, a popular pub in Rivington had to close its doors due to a devastating kitchen fire. Although the specific cause of the kitchen fire is unknown, the loss has severely impacted this business that began in 1871.

In response to the increasing need to minimize kitchen fires, Peter Thorpe (a Utah firefighter) invented the Fire Avert in 2011. Fire Avert is a device that automatically shuts off an electric stove when a fire threat is detected. The device is plugged directly into the wall and the electric stove is then plugged into the device. When a smoke detector in the kitchen is triggered, the device turns off the stove. The device consists of a microphone tuned to the unique frequencies of a smoke alarm. Nothing else will trigger the device except the sound of the smoke alarm.

Potassium acetate is the primary ingredient in wet chemical fire extinguishers. Potassium citrate or potassium bicarbonate is also often added.  A fine mist is dispelled from the extinguisher’s nozzle when the lever is pressed.  This mist cools the fire’s heat and prevents the oil or grease from splashing. The potassium salts then react with the oil particles to create a thick, slippery layer of foam. The foam prevents the oil particles from fueling the fire. All of the extinguisher’s contents should be used to extinguish the fire.

When purchasing a wet chemical fire extinguisher, ensure that it is made of stainless steel. The chemicals have the potential to be corrosive and, therefore, must be contained in the right material.

Carbon dioxide fire extinguishers have a distinct design. They have a hard horn and no pressure gauge. They operate on the principle that carbon dioxide smothers oxygen. The interior of the extinguisher is filled with carbon dioxide that is compressed using extreme pressure. Since the carbon dioxide is stored at such great pressure within the container, it is very cold when it is dispelled. Its temperature greatly assists the cooling of the fire.

Steps for Using a Fire Extinguisher

A-Aim at the fire’s base. Fire extinguishers primarily seek to attack the fuel of the fire. Aiming at the base, not the flames, of the fire therefore allows the extinguisher’s contents to work effectively.

S-Squeeze the lever slowly.  Squeezing the lever is what discharges the extinguisher’s contents.

S-Sweep from side to side.  Move the extinguisher in a sweeping motion until the fire has been put out. Always ensure that you are a safe distance away from the fire. Read the fire extinguisher’s instructions to determine the appropriate distance for that particular extinguisher. 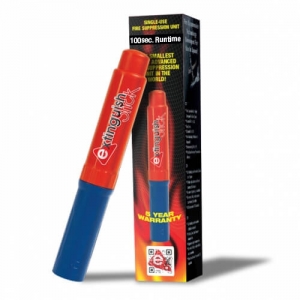 About the Author: extinguish