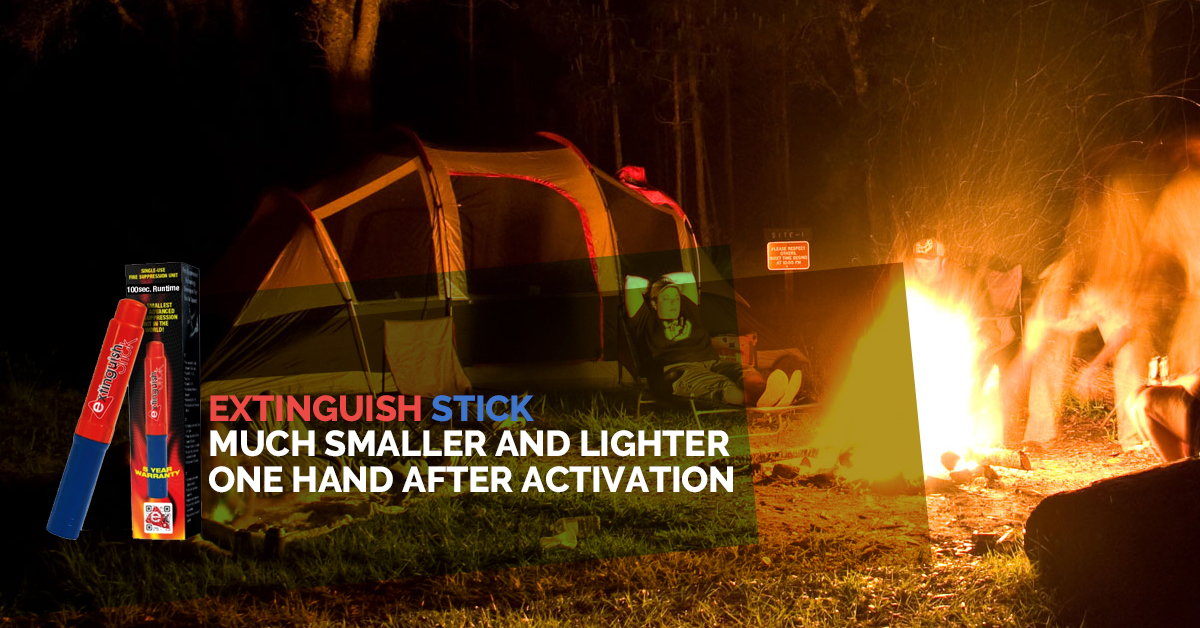 You are at the right place. We offer you the most technologically advanced, state-of-the-art Fire Extinguisher, harnessing a technology that was originally developed for Soyuz space mission. A small versatile 16-ounce ‘stick’ that packs more fire killing power for its size, than anything else before, it is the culmination of a 100 years of evolution of the technology used in Fire Extinguishers. It is basically the safest Fire Extinguisher ever invented, that carries a payload that is almost double that of standard bulky fire extinguishers, costs one-third, and is small enough to fit into a car’s glove compartment.

Why is it the best in the world?

Here are the major factors that make Extinguish Stick the smartest Fire suppressant in the world today.

* Unlike traditional fire extinguishers, Extinguish Stick does not require any servicing or maintenance. It is a powerful one-time-use device that does not require re-filling, and is discarded after use.

* A benchmark in Fire Extinguishing technology, Extinguish Stick is environment-friendly. It leaves no harmful or hard-to-clean residue behind. The technology is non-corrosive to wires and other materials.

* Extinguish Stick comes with a 5 year warranty! That’s right. It is tested and proven technology.

* Extinguish Stick is equipped to suppress Fires of type A,B,C and E. This means that it can be used on fires caused and fed by materials like paper, wood, flammable liquids, electrical, and kitchen oils or grease.

* At 16 ounces, Extinguish Stick is extremely lightweight in relation to the fire killing capacity it holds.

* Amazingly easy to use, Extinguish Stick can be deployed in seconds and used with just one hand.

* Owing to it’s power-packed, yet compact nature, it is ideal for storage and use at Home or Office, on Boats, RVs, Motorcycles, Automobile and while camping or while working in proximity to a fire.

* Can be used safely near freshwater or marine environments.

* Costs only one-third of what traditional fire extinguishers do, yet packs double fire suppressing power.

* Can be used as a smoke flare type signalling device in case of an emergency.

How is it used?

The Extinguish Stick employs a highly unique technology for fire suppression and is undeniably the most superior quality Fire Extinguisher available today. This marvel of technology is amazingly simple and uncomplicated to use and is absolutely foolproof.

The Extinguish Stick is similar in appearance to a “road flare,” only slightly larger. The operative end of the Stick has a cap covering the top of the device and is red in color. The rest of the unit is blue and serves as a handle. Specially molded surface of the handle enables a good grip on the device when in use. The cap of this unit, once removed, can be inserted on to the bottom of the handle, thus creating a longer reach. Make sure it is pointed in a safe direction and simply pull the yellow safety pin off the top. Extinguish Stick will instantly activate.

The science behind it

The removal of the yellow pin triggers a blending of Potassium Nitrate with other components, which in turn forces a jet of gas out of the top of the device. This chemical formulation, protected by patent, can be precisely manipulated to create time-controlled chemical reactions. The reaction is energetic and releases visible gas with a force that can be directed towards the affected area. This gas rapidly depletes the fire of oxygen, thereby killing it effectively within seconds. The Extinguish Stick will last approximately 50 or a 100 seconds, depending on the device deployed. The chemical reaction used in Extinguish Stick is so energetic that it surprises the user with it’s fire suppressing capability.

Leaves no dust or residue

Since the jet or spray is an aerosol gas and does not contain any particulate material, it leaves behind no ‘dust’ or covering residue or contaminating effect. Extinguish Stick is therefore the most Eco-friendly fire suppressant available today.

Once deployed, Extinguish Stick will discharge continuously for the set period of time. Even after the fire has been completely subdued, it is recommended that the user apply the continued emissions towards the source of the fire for several more seconds. This greatly diminishes the chances of a re-flash. Once confirmed that the threat no longer exists, Extinguish Stick can be taken outdoors and allowed to complete it’s timed performance. It can also be safely put off simply by submerging its head into a bucket of water. It can then be disposed through normal trash – it’s eco-friendly composition does not require special disposal.

It is the world’s smallest, most effective fire extinguisher

There can be no doubt. Extinguish Stick is in a class by itself. The most advanced, unique, maintenance-free, fire suppressing technology, producing an awesome 50-second burst of fire-killing time, packed into a 16-ounce container that fits into a glove compartment!
Gone are the days of bulky, heavy fire extinguishers. Extinguish Stick is MUST HAVE for the safety of your home, office and car. Easily stored and amazingly powerful, Extinguish Stick costs only one-third of a traditional fire extinguisher and packs twice the punch. Buy one for each of your rooms today.

About the Author: extinguish